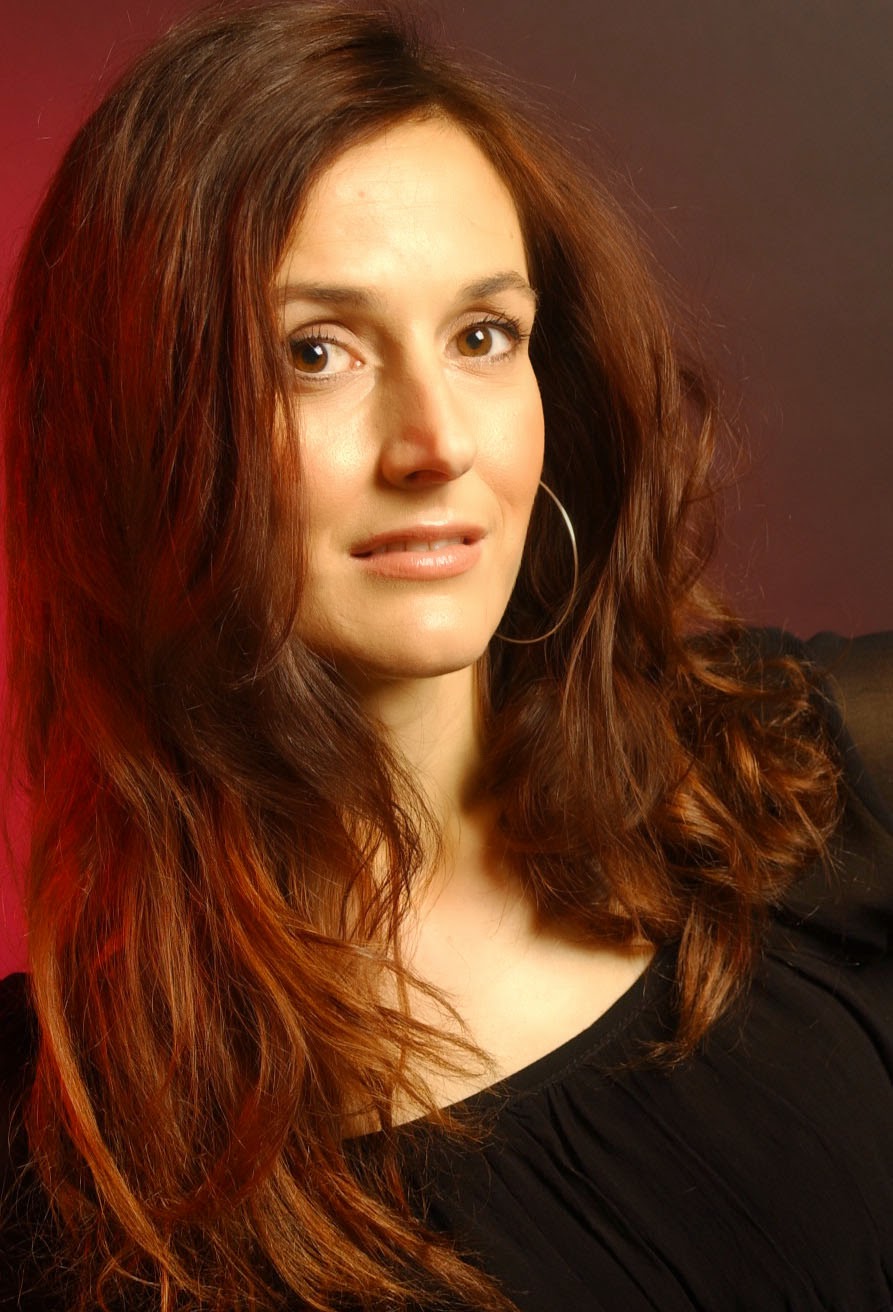 Every author dreams that, one day, their book will be made into a movie, or a television series. Of course, it happens to few of us but it’s nice to dream and many writers cast their novels during the writing process; it can help with characterisation and visualising your leads. I’m not one of those authors but I have relished this opportunity to act out a fantasy, so many thanks to Jencey for this!

Public Battles, Private Wars is quintessentially British, and like, say, Brassed Off, The Full Monty and Billy Elliot, chances are it would be made (if at all) with a British cast. However, as we’re in fantasy-land I’d also like to imagine it relocated to a small American mining town, somewhere outside Pittburg, let’s say. So here’s my dream-team cast lists: the cream of Hollywood and British acting royalty.

Mandy Walker – my lead – a feisty young redhead who finds love and personal fulfilment during a terrible year of hardship and strife would be played by Karen Gillan and Amy Adams. Both actresses would have to do a ‘Renne’ and gain 20-odd lbs because my Mandy loves cakes and definitely isn’t skinny, but both actresses can do vulnerable and insecure as well as kick-ass feisty and they’ll lovely without being scary-beautiful.

Keira Knightley and Natalie Portman because they are breathtakingly beautiful with the ability to hint at a darkness beneath their gorgeous exteriors.

Dan Braithwaite – Ruth’s sensitive, handsome husband with a dark, shameful secret – would be portrayed by Kit Harington and Joaquin Phoenix. Both actors are handsome in a slightly less than conventional or perfect sense and can do strong and brawny alongside vulnerable. Both are magnetic.

Rob Walker – Mandy’s good looking, hard drinking, tough husband - would be played by Tom Hardy and Zac Efron. Tom Hardy should be obvious, if you’ve read the book (or even from the three word description above), Zac Efron perhaps less so. I’d like Zac stateside because looks-wise he’s just perfect – those blue-blue eyes and dark hair – and because I’d like to see him play someone who isn’t altogether nice, someone a bit raw, someone who makes stupid decisions and pays the price. 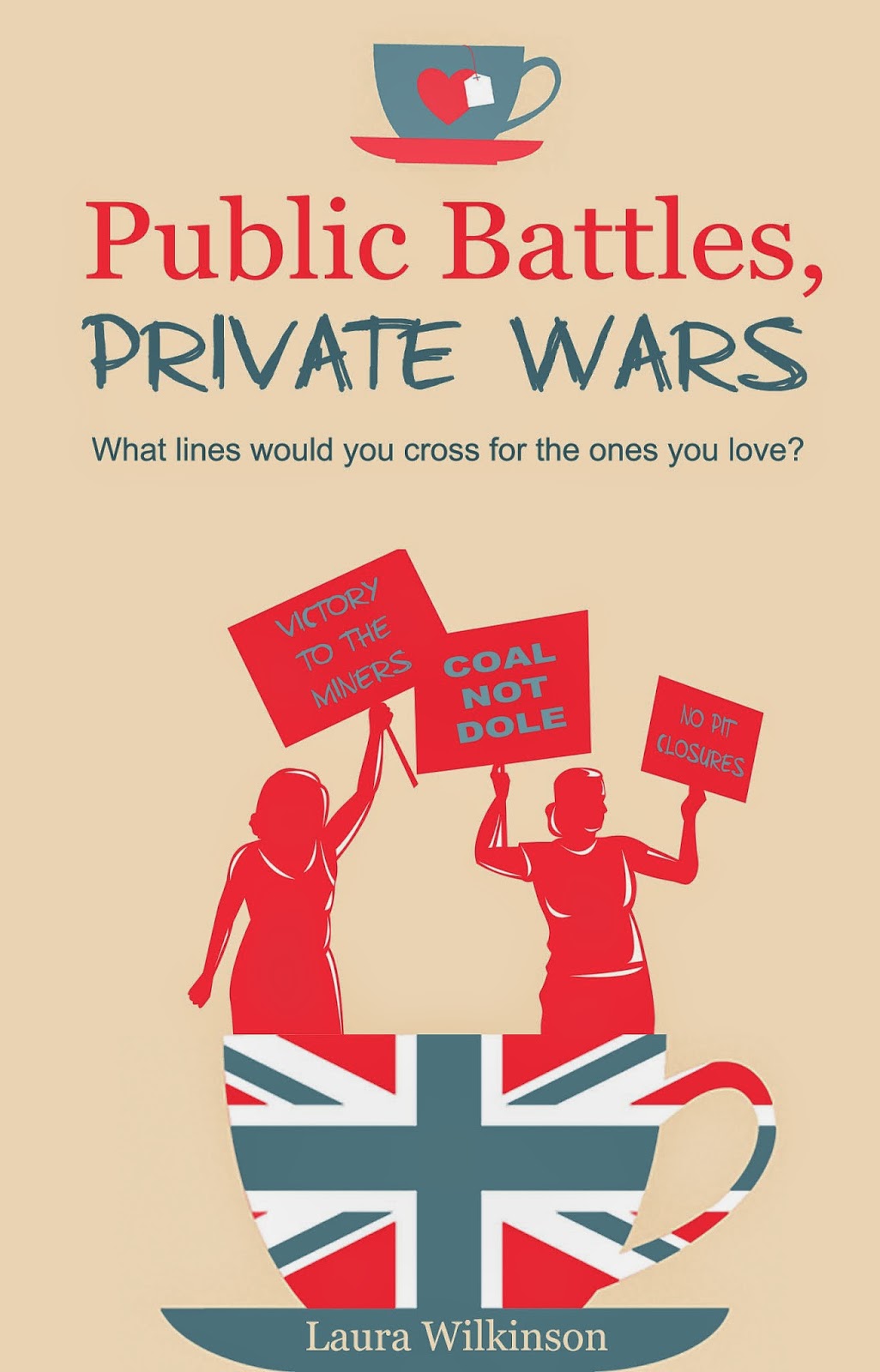 Ethel Braithwaite – Dan’s hard-nut exterior, soft interior, mother and matriarch of a male-dominated family – is to played by Julie Walters (she needs to be funny) and Kathy Bates (for she also needs to be terrifying occasionally).

And if I could choose my director? I know… it would never happen – indulge me! I’d choose Clio Barnard because she did such a beautiful job of The Selfish Giant, which is also set in the North of England. Here’s a bit more about the book and where you can buy it.
Yorkshire 1983
Miner’s wife Mandy is stuck in a rut. Her future looks set and she wants more. But Mandy can’t do anything other than bake and raise her four children. Husband Rob is a good looking drinker, content to spend his days in the small town where they live.
When a childhood friend – beautiful, clever Ruth – and her Falklands war hero husband, Dan, return to town, their homecoming is shrouded in mystery. Mandy looks to Ruth for inspiration, but Ruth isn’t all she appears.
Conflict with the Coal Board turns into war and the men come out on strike. The community and its way of life is threatened. Mandy abandons dreams of liberation from the kitchen sink and joins a support group. As the strike rumbles on relationships are pushed to the brink, and Mandy finds out who her true friends are. 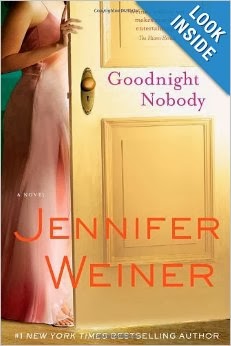 Welcome to Upchurch Connecticut where the moms are snobs and your husband is barely there. One day you receive a phone call from one of the other moms (Kitty Cavanaugh).  What could she possibly want?

Kate Klein is a young mother of three who brought her children to this lovely house and makes a discovery.  Kate does the responsible thing and let the police know, but she can’t let it go of what she has discovered.  She starts to pursue leads as to who did it?  While her best friend Janie is game to help solve the case her husband is not.   What about a blast from the past?  What changes does this bring for Kate and her family?

I was very entertained by this classic Jennifer Weiner novel.  I listened to the audio version where Emily Skinner narrated.  I very much enjoyed her narration.   This novel was one of the more humorous mysteries I have ever read.

Who doesn’t identify with moving to a new town and not fitting in?  I had really hoped that the husband would come around.  I felt sorry for her with his ignorance.   I had thought the novel would last longer than what it did! I sort of hoped for a different ending. 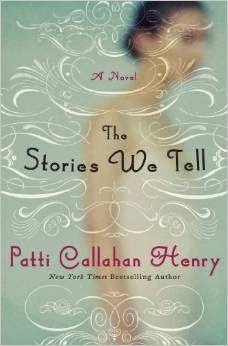 Thank you to Patti Callahan Henry for coming to Writer's Corner today to share her casting picks for THE STORIES WE TELL.

The main character in THE STORIES WE TELL, Eve, is in her forties and running a letterpress company. Eve is a creative spirit trying desperately to keep the image of her life together. If I close my eyes I can see Diane Lane playing this character exactly right. Oh, to hear her say. "Can't anyone be happy in your stories?" (a line from the book).

Eve's husband Cooper is cool enough to pull off the best of lies and look good doing it. Sean Penn would saunter through this role with ease. By the opening of the movie, he'd have a scar across his face and look good sporting it while keeping his life together. And Max, Oh my favorite character and Eve's co-worker. Mark Ruffalo definitely. I saw him while I was writing this part--his rugged good looks and raspy voice with a quick wit.

Eve also has an eighteen year old daughter struggling with her own "becoming" and Elle Fanning (From We Bought a Zoo) has that perfect pitch between rebellion and adorable.  Eve's sister, Willa, is a co-star with Eve: her memories and dreams push the story forward with some comedy and some sadness. This part was made for Reese Witherspoon with her southern accent and whimsical air.
To find out more about Patti please visit her on her Facebook page, Twitter, and her Website.

To preorfer your copy of The Stories We Tell which is out June 24th .

What Happens When You Lose a Sister?

L. Alison Heller shares her second novel The Never Sisters with us.  Thank you for a copy.  We are also sharing a few copies for our readers.  Stay tuned for further details.

Paige has always done what is asked of her by her parents.  She has the perfect career as a Marriage Counselor.  All is right with the world until her older sister Sloane comes back into her life.  Her family has to cope with how this will impact them.  This is not Paige’s only problem.  Her husband Dave shows up at the apartment during the middle of the day.  He says that he is suspended until further notice from work.  Paige has many questions but with few answers.  Will her sister be able to help her?  Will Dave tell her the truth? 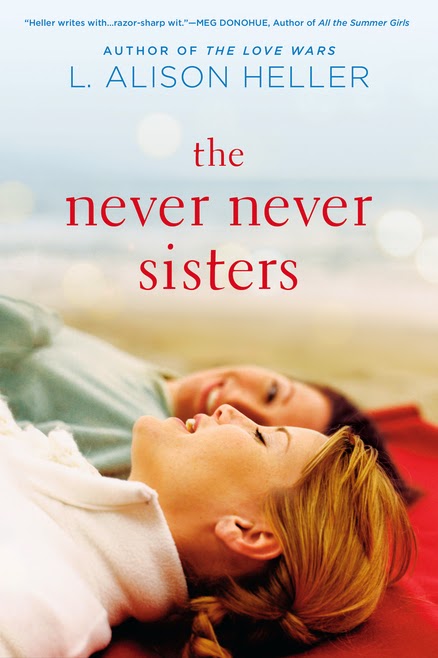 So what did I think of L. Alison’s second novel?  I liked it.   The novel asks the question what happens when a long lost sister comes back to her family to reconnect?   We see most of this story through Paige’s perspective.  There are snippets throughout the novel from their mother Vanessa which is shared from her journals.
Paige and Sloane’s story is set in Upper East Side New York.  They both come from a high society family.  Where reputation is key more important than anything else.  I often describe my sister and myself as opposite as night and day.  I think this description applies to the sisters.  Paige is the good girl who follows exactly what her parents want in her life.  Sloane is rebel with a cause of reconnecting with her family.  A chance with her sister?

The part of the story that was hard for was trying to find out what was going on with Dave.  This character annoyed me and me think he was very shady.  I think pacing could have been better.

This story is a great beach read!

Please make sure you visit the post for 100 Follower giveaway!
Posted by Jencey Gortney at 2:00 AM No comments:

How would L. Alison Cast The Never Never Sisters? 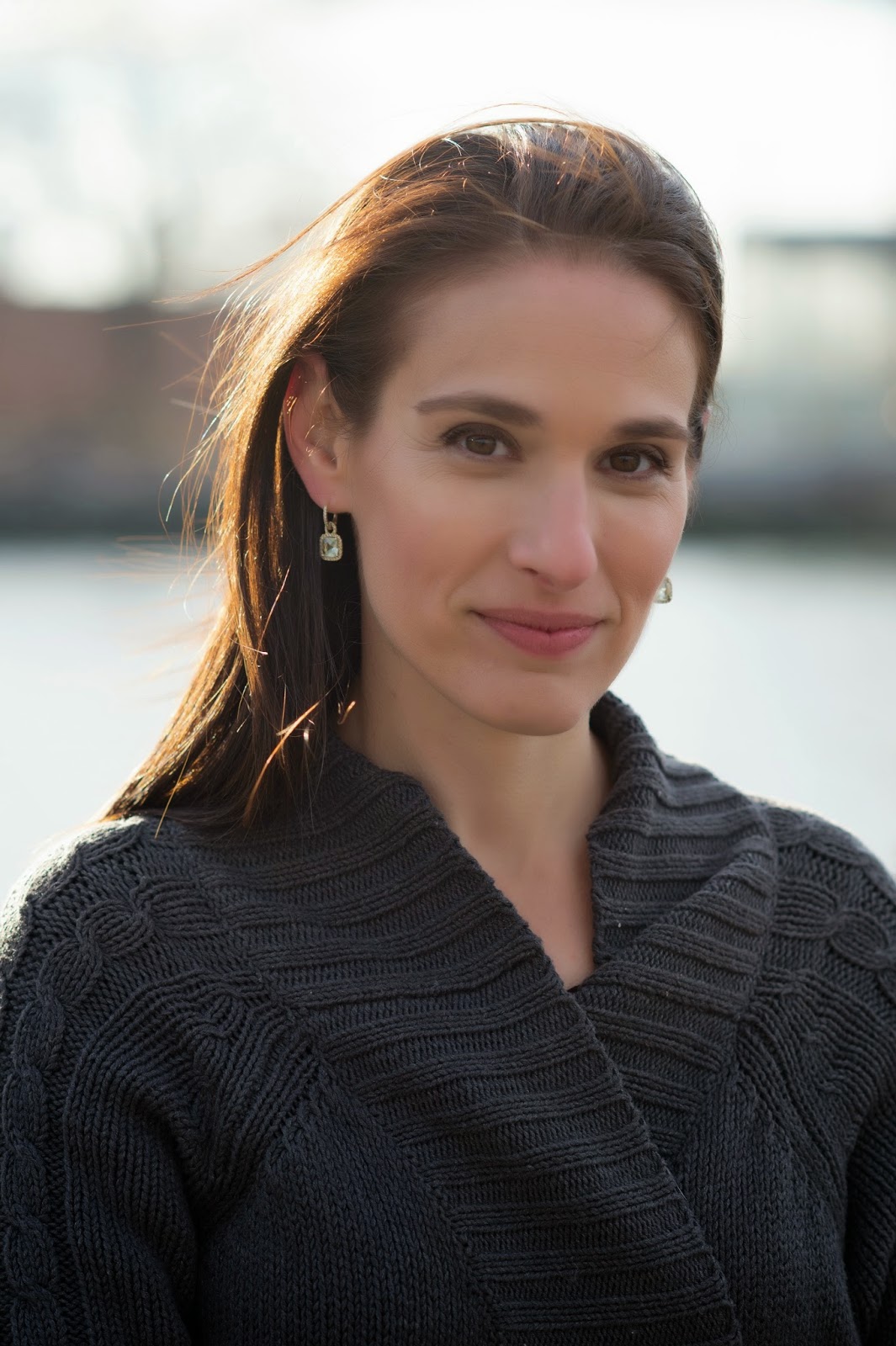 Thank you to L. Alison for stopping by Writer’s Corner to share casting The NeverNever Sisters.  So let’s see what Alison has to share!

Paige:
During the months that I was heavily revising the book, I happened to step into the same subway as Mamie Gummer, who was just there, hanging out in the middle of a crowded car, talking to a friend. I try to act like a cool New Yorker when I see celebrities but this time, I broke into a huge goofy grin because the only thought in my head was, “There’s Paige! Hello Paige!” (The voice in my head sounded a lot like Andre the Giant in The Princess Bride.) She’s all lovely and golden and possesses the exact unique prettiness, as well as a sweetness, that I pictured the character having.

Sloane:
This one is tough. Aubrey Plaza could probably do a decent job, although she’s a little young, I think. Or maybe one of the other Gummer sisters in a dark wig? They’re probably young too. Oh! I know! Angelina Jolie: I hear she’s not hard to get at all.

Matt Long. He’s been on a few things: Jack on the TV show Jack and Bobby (although I’m the only one who watched that, I think—mostly because of him) and Mad Men (he was the one who was so horrible to Joan that Peggy fired him). He’s extremely nice-looking and I think could do an excellent job of being charming/disarming with just that twist of sourness. Plus, he was really, really fun to picture while writing. 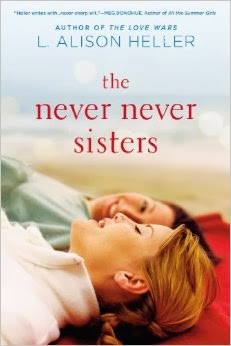 This is embarrassing, because I have someone in mind, but her name has gone into a deep dark well in my brain and I can’t retrieve it. She’s been in a bunch of—none of which I can remember—and I just spent about a half an hour trying to track down her identity, but couldn’t. So . . . let’s go with Lainie Kazan, okay? If I think of the other actress, I’ll let you know. (Do you think actual casting decisions ever get made this way? Let’s all be grateful I’m not in Hollywood, although Ms. Kazan would do a fantastic job I’m sure.)

Percy:
Matt Czurchy (Logan from Gilmore Girls and Cary from The Good Wife) because he’s blond with the perfect crinkly smile and dry delivery.
Posted by Jencey Gortney at 2:00 AM 1 comment: