What Would Does it Take To Believe in Change? 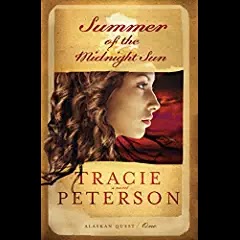 Tracie Peterson is one of my favorite authors. The Alaskan Quest is series is an older series of hers. The first book in the series is Summer of the Midnight Sun. It is the sequel to the Yukon Quest series which is an absolute must read! Jacob and Leah are the characters that carry over from that series. Karen and Adrik’s story also takes place there. Are you ready for a thrill ride?

Leah has had one desire for ten years which is to marry, but can she forgive the one man who broke her heart? Jayce Kincaid thinking Leah a child at that time rejected her. Now Leah is seeking new purpose especially after ten years of waiting for someone else to come along. Jayce comes back into her life and offers her brother Jacob an opportunity of a life time. A quest to the north pole. As Jacob starts preparing and helping Jayce an accident occurs and Leah is called to help him.

Meanwhile on the other side of the country in Washington D.C.; Stanley a Pinkerton agent gives instructions to his sister Helaina about capturing the criminal Jayce Kincaid.  As she prepares to join this quest; will she find her man? Will Leah be able to Forgive Jayce and move on?

I loved this book! It is an easy read! The characters are compelling and interesting. The author does a great job of creating complex characters that grow over the arc of the novel. This story is set against the back drop of primitive Alaska. I thought that the dialogue was wonderful too! Jacob is a very direct character and one of my favorites. He will tell it like it is. He had a conversation with Jayce about Leah and her feelings. These characters are also used to communicate a faith track throughout the book. Tracie Peterson is a master!

TraciePeterson continues to create awesome characters and great stories please check out her Beloved Hope a Heart’s of the Frontier Novel. 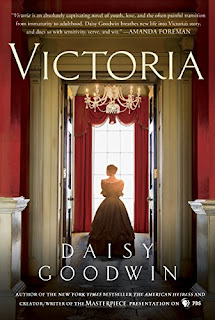 Thank you for St. Martin’s Press for a copy of this book in exchange for an honest review. I received no monetary compensation for this review.

How many of you saw Victoria on PBS? For the many who watched how many set their dvrs not to miss an episode? Today we will be reviewing the companion book Victoria by @DaisyGoodwin, which was mentioned the airing of the television episodes.

Victoria has always been under the thumb of her mother and Sir John. They brought her up in the Kensington way. When her uncle the King dies Victoria becomes his successor. She has her independence from her mother and Sir John. How will she break free? She first moves the household to Buckingham Palace. It is more central to London. Her tutor as she progresses in her reign is Lord Melbourne. He helps her navigate the rough path of her enemies. Victoria is enjoying her friend but does it come with a price? Will she marry? What changes may come as her reign progresses?

Did I love the book as much as the television show? Yes, for me it is Daisy’s best work yet. This book shows great growth as a writer. In the past I would have said that her pacing in her book is slow in the middle, but not with Victoria. I also read it while show was on the air. Daisy mentions in her thanks to the actor’s portraying the roles for helping her to write the book. I thank them as well because I could definitely visualize these characters as I read the book. The story is enticing from the beginning! Who could not identify with a teenager battling for independence from her parents?


London is a beautiful setting for the story of Victoria. I hope to visit one day. The only negative for me is that I have to wait for the next season and Daisy’s next book.  Daisy is busy working on the second season of Victoria.  She is also writing a book focusing on Victoria’s later years.