Can the Past Change the Future? 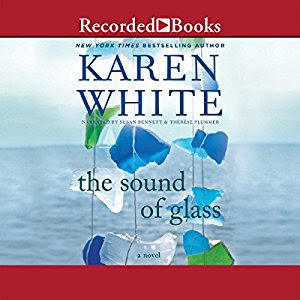 It is time to stock up on summer beach reads.  So why not start with one of Karen White’s Sound of Glass?  This story has a mysterious plane crash has consequences for two families. It also explores the consequences of physical abuse in multiple generations.  Can solving these mysteries help both sides to heal?  Are you ready to jump in?

Merritt is ready to start over in Beaufort South Carolina.  She is inheriting a house from her deceased husband’s grandma.  All Merritt wants is to be left alone at the house and make a fresh start.  Enter Loralee her stepmother and Merritt’s stepbrother Owen who are moving here, from McDonough Georgia.  Loralee plans to stay with Merritt whether she wants her help or not.  She also is hiding something that is important to Owen’s future.  How will Merritt play a role in it?  Then there is also the brother in law that Merritt did not know she had.  Is he anything like his brother?  Can she let go of the past?

I enjoyed the story.  I listened to the Sound of Glass on Audible.  I thought the narrators did a great job!  I thought they brought to life the characters of Lora Lee and Merritt very well.  The setting of Beaufort South Carolina is something I would like to see one day.  I realize the house where Merritt and Loralee stay might be fictional but still a place I would like to visit.   My most favorite part was the dialogue between characters.  There is a scene where Loralee bribes Owen to convince Merritt to go out on the water which was very entertaining. I could not wait to see where the story went next.   I felt that the pacing of the story lagged some in certain parts but I enjoyed it.

You can preorder Karen’s latest book Dreams of Falling here.

Welcome to this year’s Author In Bloom Giveaway! 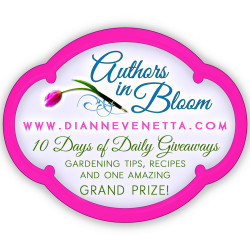 I am glad to be back sharing three wonderful new books and a recipe.  This is a blog hop which will run from April 18th through April 27th. There is also a grand prize is an ereader of their choice (up to $200 value) with second prize a $25 gift card to the ebook retailer of your choice.  You must visit each site in the hop giveaway to qualify for the grand prize, and leave a comment with email to be counted.  Grand prize winners will be announced on Bloomin Thyme’s websites. The recipe is once again from Pinterest.  This time I decided to take the Impossible Cheese Burger Pie recipe and convert into the Impossible Chicken Cheese Pie.  I loved it!  Who says you can’t tweak a recipe to your own tastes? J  I have one copy of Susan Meissner’s As Bright As Heaven.  The second book is The Lemonade year by Amy Willoughby-Burle and has just released.  The third book is the paperback release of One Perfect Lie by Lisa Scottoline. (Thank you to St. Martin’s Press and Tandem Literary for copies of these books)

As Bright As Heaven by Susan Meissner:  Maggie and her family have lived in the

Pennsylvania countryside all of her life.  One day she watches her parents discussing the opportunity to move to Philadelphia for a new opportunity.  The family had been mourning the loss of their baby brother who died.  Her mother is the deciding vote and they decide on  a fresh start in Philadelphia and her father would learn the trade of undertaking.  Once they are settled their family strikes up a friendship with the neighbors.  Then World War I occurs and life changes. When the war ends and Philadelphia celebrates the flu arrives.  How would it impact Maggie’s family?  What impact will  her actions have during the flu?  How will this  impact her family?

The Lemonde Year by Amy Willoughby-Burle:  Nina’s once-sweet life has unexpectedly turned sour. Her marriage is over, her job is in jeopardy, and her teenage daughter is slipping away from her. Then her father dies and issues with Nina’s mother come to a head; her estranged brother, Ray, comes home; and her sister, Lola, is tempted to blow a big family secret out of the water. They say the truth will set you free, but first it will make a huge mess of things. All Nina’s got left is her final photography assignment shooting images for the book 32 Ways to Make Lemonade. Well, that and the attention of a younger man, but Oliver’s on-again-off-again romantic interest in her ebbs and flows so much she is seasick. And then Jack, her ex-husband, shows up, wanting to get back together. As Nina struggles to find a way through her complicated relationships and to uncover her true path, she discovers just how valuable a second chance at life and happiness can be. (Tandem Literary Publicity)

One Perfect Lie by Lisa Scottoline:  Chris Brennan has moved to the small town of Central Valley Pennsylvania.  He is there to take over for a teacher who left to take care of a sick parent.  Once he gets the job;  he will also be an assistant coach for Varsity baseball. He starts meeting his students especially the baseball players.  He pits Raz and Jordan, who are pitchers against one another.  For what purpose?  Which one could possibly be the terrorist? When we the readers find out that Chris’s purpose is to stop a terrorist attack.  Will he be able to make his case in time?  The other parents on the team also have their issues and secrets that could influence the case.  What are they hiding and how it will it impact the team? (Writer’s Corner)

Please do not forget to leave a comment on the post or  your information in the rafflecopter.  Giveaway is open to US residents only. Good Luck!  The giveaway will run from April 18th-27th.  Here is the link to visit the other blogs in the hop.