A Tribute to be Remembered 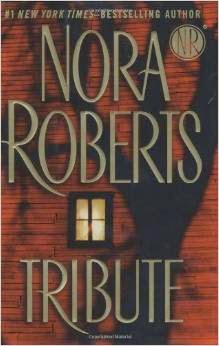 Have you ever had someone that you thought of as a mystery?  Someone from your past that has impacted you but there were suspicious circumstances of their death.  Nora Robert tells us the story of Cilla and her famous grandmother Janet Hardy in Tribute.

Cilla has recently bought the family farm.  She purchased it from her mother this farm is the former home to her grandmother Janet Hardy who bought it from her biological father’s family.  Cilla hopes to rehab it and make it a home.  This farm is located across the road from a former lawyer and author Sawyer Ford.   As she proceeds with the renovations mishaps occur.  Will she be able to continue once the damage has been done?  Is Ford Sawyer more than neighborly?   Are these mishaps connected the mystery of Janet Hardy’s death?  Will Cilla also be at risk?

I liked this Nora Roberts novel.  The plot where the protagonist is renovating a house as a do it your self project to be an interesting read.  It makes you want to find out how it would turn out.  The other aspect that makes the story interesting is character.  This author is known for creating strong characters.  Cilla is the protagonist who is a child star that has turned into a house flipper who no longer wants the Hollywood life.  Ford her romantic interest is a former lawyer who writes graphic novels.  It is symbolic to note that both of these characters have switched or in the process of switching careers.   We the readers get to take the journey of discovery with Cilla and Ford.

The plot of this novel had many twists and turns.  I expected some and there were others that were a surprise.  I was a little disappointed with the lull between plot points in the novel.

This novel is enjoyable and I would recommend picking it up!

Jane has a very special gift for my readers to celebrate the launch of my sixteenth novel, SAVING GRACE, on December 30th in the US. If you pre-order SAVING GRACE, you’ll get a Jane Green book for free, and not just any old book… 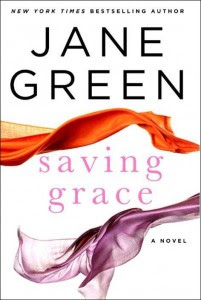 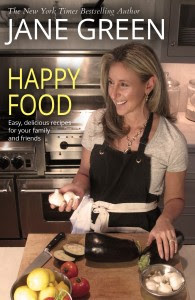 Most of you know that I not only love to cook, I had some chef training at the French Culinary Institute in New York a few years ago. I have finally penned my very own cookbook. HAPPY FOOD is filled with recipes I have created, collected, and cooked for years. This truly is the food that makes my family and friends happy.
I’m sharing these recipes with you, my loyal friends, straight from my heart. There are desserts and entrees, appetizers and sides. Each recipe is accompanied by a story from me about what that particular dish means to me, or how it features in my life, including some of the mishaps.
A beautifully designed e-book, HAPPY FOOD is filled with gorgeous never-before-seen photographs.
HAPPY FOOD will be available for purchase at a later date, but for now the only way to get my brand new cookbook is via this special promotion.
Here is how to claim your free gift:
1. Order SAVING GRACE from your favorite bookseller between now and 12/29/14
2. Email your proof of purchase to happyfood@tandemliterary.com
3. You will receive an email response with a unique single-use code to redeem your free copy of HAPPY FOOD
It is that simple. If you live outside the US and have already bought SAVING GRACE, you are still eligible to claim this gift. Just follow the same steps as outlined above, sending in your receipt to get your code.
I hope you all love HAPPY FOOD as much as I loved putting it together. Enjoy it along with my deep and everlasting gratitude for your continued support.
Happy reading and happy cooking to each and every one of you.
Much love,
Jane xxx

How Do Choices Impact Others? 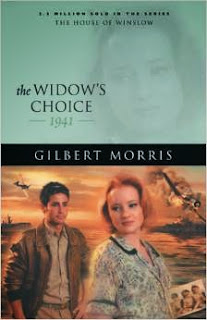 The Widow’s Choice is one of the few remaining novels in the House of Winslow series that I hadn’t read.  We are into World War II and how does this impact the members of the Winslow family?  We meet a new character Alona Winslow Jennings who is the daughter of Cassidy and Serena Winslow.  She is not mentioned in previous novels.  So what do I think of this one?

Alona Jennings couldn’t be happier with her family, her husband Truman Jennings and their three sons Tim, Carl, and Zachary.  One day out while out with her husband and family he points out a bunch of crows in the sky.  He then refers to it as a crow summer.  This means that something bad is about to happen.  Alona doesn’t put much stock in this saying until she gets news of her husband’s death.  Although she receives a settlement from the quarry where he worked, she finds herself a widow during the Great Depression.  How will she provide for her family?  Will the next man who comes along be the right answer?

The one surprise for me was the plot.  It became more of a disappointment.  One plot device that the author uses is to have a member of the Winslow family start out as the bad apple that redeems him or herself.  Since I have seen this plot before the story became predictable.  This time there is one twist where the bad apple is not a Winslow but one of the other characters in the novel.
Always continue with the series!

Kristin Hannah Shares Her Reasons for Writing the Nightingale!