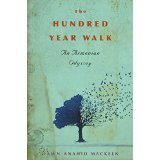 Jennifer Clayton has won the copy of A Hundred-Year Walk by Dawn Mackeen.  Please contact me for prize fulfillment.
Posted by Jencey Gortney at 6:52 PM No comments:

Return of the Witch by Paula Brackston 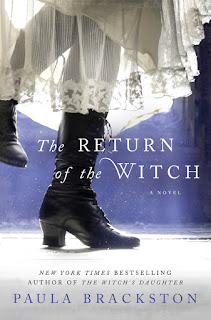 Paula Brackston's debut novel, The Witch's Daughter, was the little book that could--with a captivating story, remarkable heroine, and eye-catching package, it has now netted over 200,000 copies in all formats. Now Paula returns with its sequel The Return of the Witch, another bewitching tale of love and magic, featuring her signature blend of gorgeous writing, a fabulous and intriguing historical backdrop, and a headstrong and relatable heroine readers will cheer for.

After five years in the Summerlands, Gideon has gained his freedom. Elizabeth knows he will go straight for Tegan, and that she must protect the girl she had come to regard as her own daughter. In the time since she the dramatic night in Batchcombe woods, Tegan has traveled the world learning from all manner of witches, and she is no longer the awkward teenager and novice spellcaster she once was. However, her skills are no match for Gideon's dark, vengeful power, and he succeeds in capturing her. Will Elizabeth be able to find her? Will they be able to defeat their nemesis once and for all?
In a breathless journey that takes them through history to the 17th and 19th centuries, witch pursues warlock. Three people steeped in magic weave a new story, but not all will survive until the end.
Excerpt
MATRAVERS, FEBRUARY 2014
Willow Cottage appeared pleasingly unchanged, looking so very much as it had the day I made it my home nearly six years before. February winds had brought abundant snow, so that the entire village was thickly coated. The storm had moved on; the air was clear and the sky free of clouds. Morning sun glinted off the white ground. Standing at the gate that marked the boundary of the garden, I noticed the holly plants I had used to fill gaps in the hedge had grown well, adding their prickly strength to the protective border around the front of the house. Beneath the layer of snow I could discern the familiar shapes of sturdy shrubs and winter plants, and to the side the willows themselves were still graceful, even in their unclothed, brumal state. On the roof bare patches of slate gleamed wetly where the heat from the chimney had melted the snow, and a steady plume of pale smoke suggested seasoned wood was being burned on the Aga in the kitchen. My heart tightened. I could so clearly picture the cozy stove, the worn furniture mellowed by age, rows of jars and bottles on the aged oak dresser, the low window over the sink looking out to the vegetable patch at the rear of the house.
But I was remembering the way things were when I lived there. When Willow Cottage was mine. Now it belonged to Tegan. Would she have altered the interior? I wondered. Would I find things displaced, new furnishings, a different mood to the place, perhaps? Of course, Tegan had every right to do as she pleased with her own home. I had given it to her completely, without condition, precisely so that she might find a sense of belonging that seemed to have always eluded her during her somewhat rootless childhood. And how would she receive me? There had been times when I had longed for this moment to come, but now I found myself reluctant to open the gate, walk up the narrow garden path, and knock upon the front door. I had visited her in her dreams on several occasions during the past five years. I had sought to give comfort and encouragement when I could. And I had tried to warn her. I was satisfied that she had heard me, and I believed I understood her well enough to know that she did gain solace and reassurance from that tenuous contact. To stand before her again, however, solid, earthbound, returned as if from the dead, well, that was another matter entirely. She would be shocked. She might well be frightened. Would she be angry with me for leaving her? Had she forgiven me? Would she comprehend the reason for my coming back, uninvited, into her life?
A low sound from beyond the house caught my attention. Muffled by the snow, the noise was rhythmic, workmanlike, coming from the kitchen garden. Sweeping, I decided. Tegan. I pushed open the gate and followed the path around the side of the house, happier that our reunion was to be outside, beneath the cheerful sun and the soft blue of the sky. At shoulder height, a blackbird flew as my escort, its song alerting everyone to my arrival. As I rounded the building the noise of sweeping ceased, and there she stood, leaning on a handmade besom, head turned to see who it was who called upon her. I stopped in my snowy tracks. Willow Cottage might have altered little, but Tegan was transformed. The slight, awkward girl I had left behind had grown into a strong, beautiful, young woman. She was warmly clothed against the winter’s cold, with a woolen hat and gloves and a bulky padded coat. Her Wellington boots looked a size too big, and her legs were still slender, but she had an adult shape to her now. I studied her face, trying to read her expression, eager to gauge the impact seeing me would have upon her. She gasped. For what seemed an age, she neither spoke nor moved. My heart lurched beneath my breast. I could only imagine what turmoil her own must be in. Would she trust the evidence of her eyes? I am not sure that I would have done so, had our roles been reversed. I forced myself to speak, to say something, anything, to break the unbearable tension of that moment.
Buy Links:
Amazon, Barnes and Noble, Books A Million,  and MacMillan
About The Author:

Does Friendship Grow Through the Generations? 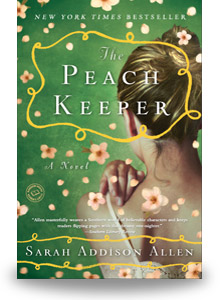 Sarah Addison asks this question in her most recent novel The Peach Keeper.   This novel is published by Bantam Books.  The story has themes of friendship, becoming independent in life, and mystery.   I highly recommend taking a look at this fabulous novel.

Willa Jackson likes it when things stay as she wants them to be.  She is content to run her business and visit her grandmother on the weekends.  Paxton Osgood visits her grandmother as well on the weekend. She is friends with Sebastian the dentist but would like it to be more.  Paxton is president of the Ladies Social club.  They are planning a gala that includes Willa’s old family home.  As the details come together Paxton’s brother Collin comes back to town to help out.   He is the landscape artist to put the finishing touches on the old home.  So what happens when a body is found under the old peach tree?  What about the confession by Paxton and Collin’s grandmother?  How will Willa and Paxton get to the bottom of this mystery?

Walls of Water is the perfect setting for  The Peach Keeper.  I know that I would love to visit!  The characters could definitely hold their own.   Willa is very set in her ways.  Paxton’s struggle for independence, in her own life.  Sebastian struggle with acceptance of self and where his future might be in Walls of Water.  Collin’s struggle to put down roots.    It took some time for me to grow to love them as they developed.   I eventually wanted to fight for both Paxton and Willa.  The author offered a satisfying conclusion.

The novel keeps its southern flavor and charm.   It was a delight to read!  I look forward to more from Sarah Addison Allen.

No Ordinary Life by Suzanne Redfearn

Welcome Suzanne Redfearn to Writer's Corner.   We are delighted to share her new book No Ordinary Life.   Here is a little about the book:

Exploring celebrity and its consequences, Suzanne Redfearn’s sophomore novel, has it all—romance, Hollywood allure, a secret past, scandal, and drama. Gripping, heartbreaking, and honest, RT Book Reviews proclaimed, “From a deeply emotional place, Redfearn writes with a beautiful rawness…heartfelt dialogue and intense conflict make this story an extraordinary read.”

Inspired by the memoirs and stories of past child actors and their families, Redfearn has crafted an engrossing novel that follows a struggling single mother as she fights to protect her children from the dangerous world of Hollywood.

Thrust into Tinseltown’s world of glitz and glamour after her Shirley Temple-esque daughter Molly is discovered via YouTube, Faye Martin is naïve about the industry and unprepared to protect her from ruthless producers, obsessive fans, and the relentless demands of fame. As Molly’s star continues to rise, what initially seemed like a blessing transforms into a high-stakes game in which one wrong move could destroy Faye’s family forever. Yet there are a few allies to be found in this new world including the handsome director of photography who Faye finds herself inexplicably drawn to. But when circumstances take a deadly turn and Faye is faced with an impossible choice, she must decide if fame and fortune are worth the price of family. 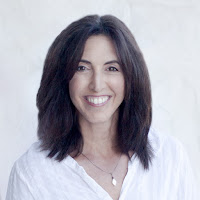