Sharing the Stage – Co-Authoring a Novel by Travis Casey 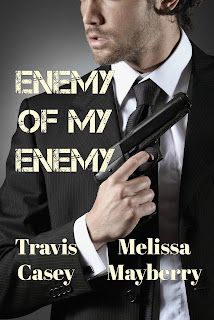 I joined an online critiquing group in 2011. In addition to having my work read and reviewed, I would do the same for others. I stumbled across a writer named Melissa Mayberry. She was writing her first novel, a YA romance, with characters who had me screaming at the pages at their ignorance, feeling their pain at rejection, and cheering at their victories. I knew she was good by how much emotion she evoked from me. I was writing my first novel as well and we soon became writing partners exchanging ideas and offering feedback on each other's stories.
One day Melissa asked if I'd like to write a book with her. I was flattered. No writer is going to jump into a metaphorical bed with another writer unless they feel the writing is good enough for their name to accompany their own on the cover.
The first question was how does someone begin writing a novel with someone else? There was little question how we would do it in terms of POV (point of view). It would be in first person and I would write the male MC and Melissa would write the girl, and we would alternate chapters.
We decided we would pick each other's names. I named her character Gemma Gage and she called mine Thaddeus Kline and we agreed that we would make up the physical attributes for the other one's character. I remember Melissa saying to me "If you make my character an 'A' cup so help me God I'll give Thad a nervous bowel of embarrassing magnitude. So I knew we were going to have fun. Next we needed a setting. Through previous conversations we discovered that we both loved Asheville, North Carolina. So that was it. We had a place, although the story does move through all of North Carolina and parts of Tennessee.
Melissa had come up with a title she wanted to write (Enemy Of My Enemy) before we even began, so the characters needed a common enemy. We decided to make it her husband, Bruce. And that was about all we discussed before putting pen to paper, except that I would write the odd number chapters and Melissa the even.
We didn't plan much else and let the story take us where it wanted to go. We never knew what the other one would write in answer to our own chapter then had to move the story according to what the other character said, did or discovered. Every time I wrote a chapter and sent it to Melissa, I couldn't wait to see what she would come back with. I think she took delight in throwing things my way that I could have never anticipated. I would often sit and wonder for hours "How the hell am I going to get out of this situation?" Then I would send her back my chapter with a "Ha! Let's see how you get out of that one" attitude.
I noticed about 7-8 chapters in, although never discussed, we were each writing about 2,000 words for our respective chapter. I think she twigged on that as well and that became our target which was beneficial to keep us in equal proportions. Once we hit around 30,000 words, I suggested we aim for 70,000. We wanted a full length novel but didn't want it to become a runaway train just rambling for us to have fun. It needed to work toward a finale at some point to make a coherent story. At around chapter 24 (there's a total of 32 chapters) we had to take a time-out to do a major edit and revision. We needed to be working toward an ending but in our excitement some plotholes developed and we needed to plug them to keep the conclusion logical and consistent.
Melissa and I have never met nor spoken but have enjoyed one another's work and we're able to put together a fascinating story that we both hope readers will enjoy. Fasten your seatbelt and get ready for a wild ride!
Here's what it's all about:
The Enemy of My Enemy is my friend – but is Gemma Gage the kind of friend Thaddeus Kline wants?
When US Embassy officer Thaddeus Kline’s wife turns up dead he blames crime boss Bruce Gage and makes it his mission to destroy him. Kline sets out for North Carolina determined to settle the score. What he doesn’t count on is coming up against his adversary’s wife, Gemma.
Gemma Gage is living in the lap of luxury. She does not ask, nor does she care, where the money comes from. She is a loving wife and a good hostess to her husband’s business associates. Just as she makes an unwanted discovery, Bruce catches her red-handed scrutinizing his dealings and retaliates by keeping her captive in her own home facing inevitable death by a Bengal tiger.
When Thaddeus breaks into the Gage mansion looking for Bruce, he gets a whole lot more than he bargained for. Thaddeus takes Gemma as a hostage cum bargaining chip – but Bruce Gage didn’t get where he was by rolling over easily. Thad and Gemma soon become the hunted and their clashing personalities must join forces to combat a common enemy. As their thirst for revenge deepens, so does their involvement in the fractions of the criminal underworld. Rival gangs fight for their allegiance which leaves them with no alternative except to trust each other. But can they?
ENEMY OF MY ENEMY is out 26 February 2016
Travis Casey