What Does the Lady Want? 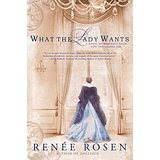 Delia Spencer attends a party the evening of 1871 when the Chicago Fire begins.  She also meets Marshall Fields.  Her family takes refuge north of the city.  What is left? She later marries Percy an old friend.  The marriage does not give her what she most desires a child.  Delia starts to run into Marshall Field again at various gatherings in social set.  She also finds her feelings for Marshall Fields growing.  When Fields decides to deepen his relationship with Delia will the respective spouses agree?   Will Fields be able to give Delia what she most desires?  Does his business operation continue to grow?  What will the future bring?

I loved this novel!  The story telling is so fluid in bringing the reader to one event after another.  Ms. Rosen is a great storyteller!  This novel was well researched and executed.  She explains the purpose for why the characters are and the setting of the novel.  Please check out this section of the novel in the back for more information. I also enjoyed learning about the Chicago fire.    She also explores the culture of the gilded age.  My heart went out to Delia and her situation.  I found her husband to be selfish and spoiled and wish that Delia could have been more vocal to way he treated her.

Email ThisBlogThis!Share to TwitterShare to FacebookShare to Pinterest
Labels: Renee Rosen, What the Lady Wants 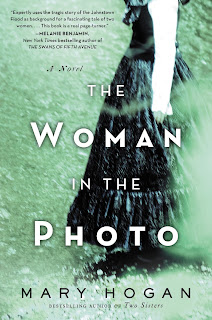 What’s the story behind THE WOMAN IN THE PHOTO?  How did the book come to be?

I first had the idea for this book 24 years ago! I’m not kidding. In 1992, my husband, actor Robert Hogan, was in an off-Broadway play called On the Bum, also starring Cynthia Nixon and Campbell Scott. The play was set in Johnstown, Pennsylvania, several years after the epic flood. The characters talked about a “lake in the sky” which piqued my curiosity. A few days later, I went to the library to read about such strange geography. That’s when I read the real story of the Johnstown disaster. Wow. I was blown away. What a great story! I held my breath for 24 years worrying that someone would write my book before I got a chance to. There are other books out there about the flood, but nothing like mine.

How did you conduct your research for the book?  Are any of the characters in the book inspired by real-life people?

While on book tour in Pittsburgh for my first young adult novel, The Serious Kiss, I had a free afternoon. So, I rented a car and drove two hours to Johnstown to see it for myself. I could have stayed there for two weeks. There was so much of interest for this Californian girl. Over the years, I would visit twice more. Generously, the President of the Johnstown Heritage Association gave me a day-long tour of everything I needed to tell a compelling tale, including access to the inside of the private Clubhouse which is still standing! Aside from the very real members of the exclusive club: steel titans Andrew Carnegie and Henry Clay Frick, bankers like Andrew Mellon, U.S. Senator and Attorney General Philander Knox, all the characters are fiction.

How was the writing experience for THE WOMAN IN THE PHOTO different from your experience writing your previous novel, TWO SISTERS?

Two Sisters was a process of opening up my heart and spilling its contents onto the page. Inspired by the early death of my older sister, I told a tale of family secrets that I knew all too well.  Writing The Woman in the Photo was a completely different experience. First, I read a gazillion historical novels. Then, I read every book I could find about Johnstown. I even read a novel called, Annie Kilburn that was written in 1889 to get a feel for the language of the day. Research, research, research. I was told that women who read historical fiction are fiends about accurate detail. So, my biggest fear about creating a main character who was an upper class woman of the nineteenth century was getting her many corsets right.

Both THE WOMAN IN THE PHOTO and TWO SISTERS center around female relationships.  Why do you think readers are so fascinated by the bonds between female family members?

Ah, yes. Those bonds are complicated, indeed. I have yet to meet a woman who didn’t have a knotty relationship with her sister or her mother. Even when they are smooth, they are bumpy. In my case, my mother and I were very much alike, and my sister and I were very different. So there were a lot of crossed wires. We hurt each other even when we didn’t know it. My dad and my brothers sort of kept their heads down and watched sports :)

For me, the best characters are flawed, striving, loving, selfish, feeling, reacting, deep, curious, furious, and worried—mostly—about their hair. In other words: women.

Is there a particular message you hope readers will take away from THE WOMAN IN THE PHOTO?

One of the themes of this novel is: Is DNA your destiny? Are you born to be who you are? Or, can life itself mold you? I would love for readers to finish The Woman in the Photo with the sense that we are all on this earth to be kind to one another. To live together. Even on bad hair days.


To purchase her novel  you can go to these fine retailers.

May We Have Your Assistance? 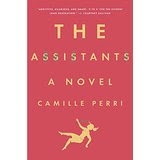 Thank you to Reading with Robin for a copy of The Assistants by Camille Perri.  This novel is one of the best of the summer of 2016.  But is it a top beach read?

Tina Fontana is the assistant to Robert the CEO of Titan.   She often has to pay out of her own pocket for what he considers business expenses.  Tina books an airline reservation and has to use her credit card. Then she files an expense report with the company.  The airline decides to reimburse her anyway after she complained about their customer service.  Should Tina give the money back to Titan or keep it for herself?  When all that Tina can think about is that student loan debt that  just won’t go away.  The tidy sum of $20,000 will take care of the entire balance.  So what happens when another assistant from Titan gets wind of what she has done?  Can Tina help her too?  Will she be helping others?  Is it legal?

I enjoyed this novel.  I think this is a debut novel for Camille Perri.  If it is it is definitely worth your time!  This novel capitalizes on a struggle that all can identify with which is student loan debt.  Then trying to find a job that pays enough to live on and afford the debt.  I had to admit that I wondered where the author was taking the story but it was so worth it!  Should I mention that this is fiction!

The story is set in New York at a fictional company Titan.  There is some humor.  The reader will often want to ask what will happen next.  Will Tina be successful and stay out of jail?

Please visit Camille on Twitter.
Posted by Jencey Gortney at 2:00 AM No comments: