Three Sisters with a Questionable Future 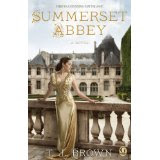 Thank you to Simon and Schuster and TJ Brownn for a copy of Summerset Abbey.  I was given a copy of this novel in exchange for an honest review.  Summerset Abbey is the first in the series based on the experiences of Rowena, Victoria, and Prudence Buxton.  If you like Downton Abbey then you might find this novel interesting!

Rowena, Victoria, and Prudence must mourn the loss of their father Sir Phillip.  His death has created some changes for the women.  Rowena is involved in the suffragettes along with her sister and Prudence.  Once the wake is over in London their Uncle says they must come to Summerset Abbey to live because he would be in control of their finances.  Prudence is not included in this arrangement.  Although she grew up with both Rowena and Victoria she was the daughter of the governess.  So why did Sir Phillip treat her just like his daughters?  Why is his brother and his wife trying to make a distinction and separate the women?

You want to talk escape!  This novel is worth your time to read.  It is a quick read because it is only 288 pages, but the story is easy to follow.  The author creates convincing characters in Rowena, Victoria, Prudence, and the other Buxtons.  The story is set in 1911 with a Downton Abbey feel to it.  The author did her research and was very accurate to the time period.

I was disappointed with the character of Rowena at times because she would often stall the story.  I wanted her to be more forthcoming with what she knew.  How many of us have strive to hold onto something only to realize that we had to let them go?
I would be read more from this series in the future!

What Did They Find?


The night before diagnosis I was in prayer at my bedside when God spoke to me.  He said “What if I have a plan to provide that will not be what you had in mind?”  I knew that tomorrow would be a big day either I would be getting a diagnosis of just an infection and discussing medication and moving into an apartment in Lilburn; or I would have to cancel the apartment and learn about cancer treatment.  I continued to hope that cancer was not in my future.

My worst fear was realized when I was diagnosed with Stage Three Inflammatory Breast Cancer with my parents on speaker phone with the surgeon.  The day became a blur for me after that.  I talked with my parents and called my friends Gina and Dawn.  I managed to make it to work for an hour because I had an appointment with my first Oncologist.  I was told once again that the diagnosis was confirmed that and that I would start Chemotherapy right away.  I would have twenty sessions.

After leaving the Oncologist’s Office I locked myself in a single stall bathroom and thought that my life was over.  For the first time ever in my working life I asked my parents to call my boss and tell her that I would be back tomorrow.

My friends and family tried to tell me that this was not the case that there would be life after cancer.  It wasn’t until I had talked with a breast cancer survivor Ellen who I had met while attending events at FoxTale Book Shoppe.  I asked if we could talk.  That night we talked and I laughed for the first time and had hope for survival.  I craved speaking to other survivors.  Ellen asked me to come to this author’s premier party for her latest book later that week.   This event also benefited breast cancer.  I attended and was glad to support this author.  I was glad to get support from Ellen and her staff in my journey.  They continue to be a source of encouragement for me

Check back next Monday!
Posted by Jencey Gortney at 2:00 AM No comments:

Email ThisBlogThis!Share to TwitterShare to FacebookShare to Pinterest
Labels: Confessions of a Breast Cancer Survivor

Escape with Iris Johansen in her new novel Shadow Play

And the Journey Begins…


April began much like March; I was looking for apartments and putting together the garage sale.  The week of the garage sale was April 18th.   The Thursday night two days prior to it.  I got out of the shower and noticed that the nipple on my left breast had turned light brown.  My first thought was this was not normal.  I called my mother who was out of town taking care of my sister after her surgery.  We agreed that I needed to get it checked out.

The day of the garage sale did not go as planned because of weather.  As I was cleaning up the garage, I made a visit to Urgent Care in Conyers.  The doctor gave me a referral to see a Breast Surgeon.  I saw him the following week.  He wanted me to get a mammogram and ultrasound.  This was planned for May 1st.  Now for those of you who don’t know one good thing about Obamacare is women get free mammograms except in my case.  Mine was considered diagnostic which means that I owed the hospital money because of not reaching my deductible and max out of pocket.
I had never had a mammogram before.  Mom and I had planned to go out and make a decision on an apartment.  We went to the hospital. I knew that they would find something on the left breast but hoped it would just be an infection.  After the mammogram and ultrasound, mom and I were called into the nurse navigator office. We were told that it was more serious than that and they wanted to make an appointment with the surgeon for the following week.  I once again conveyed my concerns about paying for care.

The following week my parents left to close on the condo in Florida.  I assured them that the doctor’s appointment would be fine and we would “discuss a biopsy of the left breast.”  I was wrong I found myself walking from the doctor’s office at the hospital to the women’s’ care wing where they biopsied the lymph node under my left arm.  I was told that I couldn’t go back to work for two days.  I found myself with the weekend to wonder what they would find.

To be continued Wednesday.
Posted by Jencey Gortney at 2:00 AM No comments: