What Would Be the One Thing You Would Like to Forget? 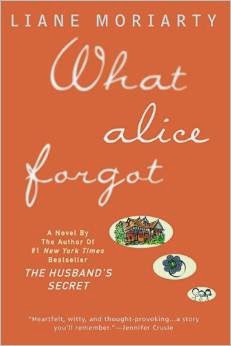 What Alice Forgot by Liane Moriarty is the novel that helped put her on the big scene in the chick lit genre.  Each novel by Liane writes is better than the last.  This is the second novel of hers that I have read and shared here.

Alice wakes up from an accident in spin class, but she thinks it is 1998.  She thinks she is twenty nine.  When in reality it is 2008 and she is thirty nine.  What has she forgotten? Her husband Nick and their current relationship status?  What will happen when Alice makes decisions that are hers alone that impact both the past and the present?  During the period that she cannot remember she had a friend Gina.  This friend had a great influence over Alice’s life.  When will her memories return?

I liked this novel.  I won this novel from Chick Lit Central around the time of the first release.  What would happen if you suddenly forgot a portion of your life? How would the old you see the choices that the current self has made?  The story had a very interesting plot line.  I don’t know that I personally would want to go back to the me of ten years ago.  I think that I would find myself making changes to the past that might influence the future.

There are two other women who suffered a challenge in their lives.  Elizabeth her sister who has been trying to get pregnant.  You see her story mostly play out in the homework for Dr. Hodges.  Then there is Franny’s letters to Phil.  These letters are to her dead fiancé.  Both women are stuck in a rut and need someone to help them move forward.  Neither of them have the accident that impacts Alice.
I look forward to reading the next Liane Morairty novel!

Please visit Liane on her Facebook page and her Website.
Posted by Jencey Gortney at 2:00 AM No comments:

Review of An Appetite for Violets and Giveaway 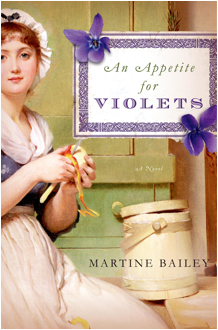 Thank you to St. Martins Press and Martine Bailey for a copy of An Appetite for Violets in exchange for an honest review.  This story reminded me somewhat of Downton Abbey about one hundred and fifty years ago in the past.  I have one copy to giveaway.

Carina needs to get away from England. But why?  She decides to take Jesmire the Ladies’ maid, Biddie the undercook, and a footman.  Then Mr. Pars the caretaker accompanies them all as the chaperone.  Biddy Leigh asks these very questions as she is asked to leave the English countryside to travel to France and then onto Italy.  She has plans to marry her sweetheart Jem.  Mr. Pars the caretaker sweetens the deal for her to go with a bonus upon return.  Her friend Mrs. Garrison also advises her to go and enjoy this adventure and to write down her journey in the Cook’s Jewel.  As the journey proceeds Carina asks Biddy to take her place so she could conceal her true condition.  Biddy becomes more than a cook but a great lady.  Will she be able to help Carina and carry off the deception?  Will there be a happy ending for everyone?

I enjoyed this novel.  I did find the pacing slow in some places.  I wanted to root for the character of Biddy and her success throughout the story. Carina is someone that I felt sorry for with her true circumstances which are not revealed immediately. The ending was a complete surprise for me. I felt the pacing of the story was a little slow in some places.  I loved the entries from the Cook’s Jewel that are interspersed throughout the novel.  These entries add an interesting dimension to the story.