Thank you Beatriz for stopping by.   Beatriz just got back from the National Romance Writer’s Conference which was in Atlanta Georgia this year.

What draws you to write historical fiction? 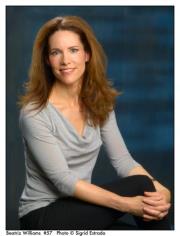 History has always fascinated me, and particularly the human aspects of history. I remember when I first visited England and stood on the site of Anne Boleyn’s scaffold in the Tower of London, I felt this extraordinary exhilaration at the idea that I was standing in that very spot, that I was looking at the exact same stones and walls she had: that the two of us, who were separated by an almost unimaginable distance of time and culture and multitudes of people living and dying, had met for this instant on a common ground. Every single historical event, large and small, was enacted by fellow human beings who breathed and felt and ate and drank, and before it became a written chronicle it was a present reality and then a living memory. So it isn’t just history that compels me, it’s the vivid interaction between past and present. It’s about striving to recover that mystical connection between us and our predecessors, that lost moment in which history was actually occurring, in which a dusty fact was still only a possibility.

How did you find out about this specific event surrounding the story in the novel?

My in-laws live on the Connecticut shore, not far from the Rhode Island border, where the legend of the devastating 1938 hurricane still runs deep. Many years ago, they pointed out to me Katherine Hepburn’s house in Fenwick, which of course was the one rebuilt after the original was destroyed in the storm. Naturally I was intrigued and began reading books about the hurricane, and I soon uncovered the story of Napatree Point off of Watch Hill, where over forty beautiful old shingled beach cottages were swept away in an instant by a storm surge that came in like a twenty-foot tsunami. Now, I’m pretty familiar with the culture of these old New England beach enclaves, and the period of roiling social and cultural upheaval between the first and second world wars has always been one of my personal obsessions, so how could I possibly resist the challenge of turning all this into a novel?

Did you base your characters off of specific people represented in the tragedy of the 1938 hurricane?

I did not. I had my own story to tell, my own vision and geography of an exclusive New England seaside community, and my own characters talking in my head. Once I understood the basic narrative of what happened that day, I deliberately avoided returning to personal accounts of the storm, except where I needed certain details to capture the sensory experience. So any resemblance to actual people truly is coincidental, or at least subconscious!

Will your next novel be historical or contemporary?

I’ve already turned in the next manuscript, and it alternates between 1964 Manhattan and 1914 Berlin, involving the same fictional world I created in A Hundred Summers and a lost suitcase that links two women from Lily’s maternal family. But the 1964 scenes do have a more contemporary feel -- I’d describe that storyline as more nostalgic than historic -- which I suppose reflects my fascination with the interaction between past and present.

What are some of your favorite activities to do in the summer?

I have four young children, so my idea of the perfect summer has certainly changed over time! I still love to travel, but now I’d rather pick one place and dig in for a week or two of local exploration. There’s something alluring about picking up a temporary routine of getting breakfast, heading to the beach or pool, going out for a drive or walk, having afternoon cocktails while the kids run around nearby. Then you head back home and look back with terrible fondness for that easy rhythm, though of course it would get tedious and aimless if that were your ordinary life.

What books would you recommend this summer?

Sadly, I’ve been so busy with book promotion and family activities, I haven’t had much time to read yet! But I always make time for Karen White, who shares my love of alternating storylines, and whose The Time Between is just lovely, and I adored Lauren Willig’s The Ashford Affair. I’ve just started reading Anton DiSclafini’s The Yonahlossee Riding Camp for Girls, which is mesmerizing, and on top of the TBR sits Ericka Robuck’s Call Me Zelda, Susanna Kearsley’s The Firebird, and Daniel James Brown’s The Boys in the Boat (look, my husband’s a rower).

Which author inspires you the most?

This is as bad as my children asking me for my favorite color! So many authors have inspired me along the way, but I’d have to pinpoint the one book that started me down the path of my obsession with the early 20th century as Vera Brittain’s Testament of Youth. It’s a harrowing memoir of one young woman’s experience as a nurse during the First World War, while her brother and lover and friends died in the trenches, and her transformation from idealism to cynicism mirrored that of the culture surrounding her.

If you could do one activity such as travel or do anything what would it be?

I’d love to do more traveling; it’s the one thing I really miss since having children. We lived in London for five years, and I’m eager to head back now that the kids are a bit older and revisit all our favorite spots. Except I’d probably burst into nostalgic tears around every corner!

Which character do you favor more Lily or Budgie?

Oh, I’m definitely more of a Lily - very much a pleaser, and terribly naive about the motives of others. But I like to think that’s a strength, really, and in fact I do have a lot of sympathy for the Budgies of the world, who are essentially prisoners of their own characters. And the turmoil in the aftermath of World War I wreaked such havoc on people like her, who for various reasons lacked a solid moral core and had nothing else to guide them through the new order.

Do you think there might be a further story of some of the characters since these events lead up to World War Two?

I’ve already turned in my next novel, which alternates between 1964 Manhattan and 1914 as two women in Lily’s family––an aunt and a younger cousin––are caught up in the repercussions of a decades-old love affair. So Lily and Nick do have cameo appearances, and of course the inimitable Aunt Julie takes the stage a few times!

What has been the biggest surprise since the publication of your first novel Overseas?

It’s so much harder to get the writing done now! I knew that promotion would take up a lot of time and energy, and I do love interacting with readers on social media, but there are so many details to stay on top of, and you can never really feel as if you’re doing enough. I still haven’t set up much presence on Goodreads, and even my niece is telling me I need to be on Instagram, and as for swag and contests and all that, I’m way behind. So it can be very hard to push aside everything else and just sit down and write stories, which is what I love best. My youngest is about to start kindergarten, though, so I’m hoping that will help!

What Happened One Summer Night in 1938? 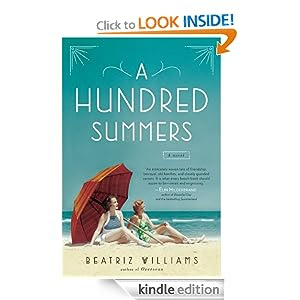 Thank you to Putnam Books and Beatriz Williams for sending A Hundred Summers. This is her second novel.  I am delighted to share it with you.

Meet Budgie who is known for getting what she wants whenever she wants it.  Her gal pal Lily always accompanies but steps aside for her friend.  The women travel in the fall of 1931 to see Nick Greenwald and his friend Graham Pendleton at a football game.  Lily immediately falls for Nick while Budgie cautions her.  On New Years Lily and Nick make a decision that could affect their future.  What will happen to the both of them?   How will things have changed in 1938?

I couldn’t say no to another Beatriz Williams novel.   The story is told in two different time periods 1931 from fall forward and then the summer of 1938.  The writer leaves you with enough questions to continue forward in the novel in both time periods.  I thought the novel was a little slow in the beginning. It picked up pace about halfway through.   The one character who stands out is Nick.  I loved the way the writer crafted the character of Budgie.   I found myself asking questions such as how did Nick and Budgie end up together?   What is real truth in their marriage?

Would you like to win a copy?   I have two copies to giveaway.  This giveaway is open to US residents only.   Please follow the rafflecopter below.

a Rafflecopter giveaway
Posted by Jencey Gortney at 5:13 PM No comments:

Wonder what life was like back in the 80s?

Welcome back to the 80s!  Thank you to BookSparks PR and Fiction Studio Books for sending me a copy to share with you.   I am glad to share Jennifer Gooch Hummer’s novel Girl Unmoored.

Apron lives in Maine and has recently lost her mother.  The new woman in her dad’s life M may not be what she seems.   M seems to enjoy wreaking havoc in Apron’s life.   As Apron goes through the year and goes what will she discover about herself?  How will she survive her mother’s death?   Then there is life at school.  What will she do without her best friend Rennie?

Girl Unmoored is a beautiful moving tale about a girl named Apron and her experiences.   The novel is told from the perspective of a thirteen year old’s world.   I felt that it was written well.  Also it is set in the 1980s.  Who doesn’t remember that time in their life?   I know I look upon it with fond memories.   The main themes in the story are second marriages by the father, jealousy, and peer pressure at the middle school level.

This novel was not one of my personal favorites.  Although it was written well, I just couldn’t get interested in the story.  I did not connect with Apron’s experiences.  I know that this novel is very popular, but I am afraid it was a miss for Writer’s Corner.