Writer's Corner is Taking a Break

Good morning!  I hope you have enjoyed this month as much as I have.  I thank all the authors who have shared a part in the first Pink Escape.    I am having surgery tomorrow, so Writer's Corner will be taking a break from October 28, 2015-December 1, 2015.   We will be back in time to celebrate Christmas.  We hope to see you then.
Posted by Jencey Gortney at 2:00 AM 1 comment:

Congrats to the Winner of The Middle of Somewhere

Rita Wray won the copy of Somewhere in the Middle!  Congratulations!
Posted by Jencey Gortney at 8:41 PM No comments:

Escape to Rome with Anita Hughes 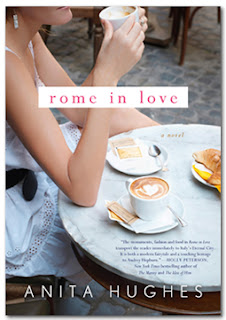 Anita is visiting us today on Writer's Corner with her next  novel Rome In Love.  Her novels seem to get better and better with time.  So that makes them a great  escape and my final recommendation!

Rome In Love:
When Amelia Tate is cast to play the Audrey Hepburn role in a remake of Roman Holiday, she feels as if all her dreams have come true. She has a handsome boyfriend, is portraying her idol in a major motion picture, and gets to live in beautiful, Italian city of Rome for the next two months.
Once there, she befriends a young woman named Sophie with whom she begins to explore the city. Together, they discover all the amazing riches that Rome has to offer. But when Amelia's boyfriend breaks up with her over her acting career, her perfect world begins to crumble.
While moping in her hotel suite, Amelia discovers a stack of letters written by Audrey Hepburn that start to put her own life into perspective. Then, she meets Philip, a handsome journalist who is under the impression that she is a hotel maid, and it appears as if things are finally looking up. The problem is she can never find the right time to tell Philip her true identity. Not to mention that Philip has a few secrets of his own. Can Amelia finally have both the career and love that she's always wanted, or will she be forced to choose again? (amazon)

You can also find her work available at these fine retailers:

Congratulations to Vivian the winner of the Susan McBride giveaway!  I hope you enjoy please get back to me as soon as you can.  The giveaway for Sonya's book is still running!
Posted by Jencey Gortney at 1:39 PM No comments: