Everyone Needs to Pay a Visit to Songbird


Mary Kay Andrews comes through with another winner!  If you are looking for the

perfect after Christmas read! Check out The Fixer Upper!

Dempsey and her friends are watching the television at the bar.  The news does not look good. She watches her boss Alex Hodder on the screen with Congressman Licata.  The headline Law firm brides congressman for vote.  After seeing this Dempsey suddenly finds herself without a job and under investigation.  Her father comes up with the perfect solution.  He would like her to renovate an old house that he inherited Songbird in Guthrie Georgia.  There is one little catch it comes with something else.  Will Dempsey be able to renovate Songbird?  Will the little surprise that comes with the house keep her from moving forward?  Will she help the FBI?

One aspect of Mary Kay Andrew’s writing is the setting.  The setting for this story is Georgetown and Guthrie Georgia.  The only thing I can tell you about where Guthrie is that it is close to Griffin Georgia.  For those of you who don’t know Georgia area well it is near Macon.   She is very descriptive about what you can expect if you happen to visit the area.

Let me introduce you to Birdsong the house mentioned in the novel.  I am not very handy myself but I found myself wanting to know more about the house’s renovation.  I also was interested in the other stories within the plot such as Ella Kate, and what would eventually happen to her.

The reader will not be disappointed!

“T’Was The Night Before Christmas”


Twas the night before Christmas,  and no one at Writer’s Corner  was stirring, not even 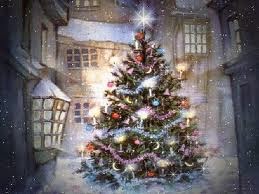 
The stockings were hung by the chimney with care,
In hopes that St Nicholas soon would be there.

The Jencey and Celeste were nestled all snug in their beds,
While visions of sugar-plums danced in their heads.
And mamma in her ‘kerchief, and I in my cap,
Had just settled our brains for a long winter’s nap.

When out on the lawn there arose such a clatter,
I sprang from the bed to see what was the matter.
Away to the window I flew like a flash,
Tore open the shutters and threw up the sash.

The moon on the breast of the new-fallen snow
Gave the lustre of mid-day to objects below.
When, what to my wondering eyes should appear,
But a miniature sleigh, and eight tinny reindeer.

With a little old driver, so lively and quick,
I knew in a moment it must be St Nick.
More rapid than eagles his coursers they came,
And he whistled, and shouted, and called them by name!

As dry leaves that before the wild hurricane fly,
When they meet with an obstacle, mount to the sky. 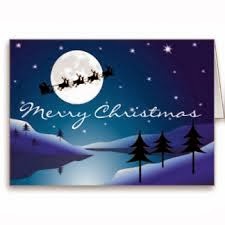 So up to the house-top the coursers they flew,
With the sleigh full of  Books, and St Nicholas too.

And then, in a twinkling, I heard on the roof
The prancing and pawing of each little hoof.
As I drew in my head, and was turning around,
Down the chimney St Nicholas came with a bound.

He was dressed all in fur, from his head to his foot,
And his clothes were all tarnished with ashes and soot.
A bundle of  Books and  greatToys he had flung on his back,
And he looked like a peddler, just opening his pack.

His eyes-how they twinkled! his dimples how merry!
His cheeks were like roses, his nose like a cherry!
His droll little mouth was drawn up like a bow,
And the beard of his chin was as white as the snow.

The stump of a pipe he held tight in his teeth,
And the smoke it encircled his head like a wreath.
He had a broad face and a little round belly,
That shook when he laughed, like a bowlful of jelly!

He was chubby and plump, a right jolly old elf,
And I laughed when I saw him, in spite of myself!
A wink of his eye and a twist of his head,
Soon gave me to know I had nothing to dread.

He spoke not a word, but went straight to his work,
And filled all the stockings, then turned with a jerk.
And laying his finger aside of his nose,
And giving a nod, up the chimney he rose!

He sprang to his sleigh, to his team gave a whistle,
And away they all flew like the down of a thistle.
But I heard him exclaim, ‘ere he drove out of sight,
"Happy Christmas to all, and to all a good-night!"

What is the Definition of a Flapper?

Angela Smith shares her debut novel Lessons In a Flapper with us today at Writer’s Corner.  This story comes at the best time for the holidays.

Autumn has just moved to San Francisco and is trying to put her past behind her.  One day in the mail she receives a letter from an older lady. Her name is Marisol and she is 99 years old and knows a great deal about the twenties.  Marisol offers to share this knowledge with Autumn who has a great interest in the twenties as well.  Life begins to take a different turn, and instead of bad things happening all the time.  She starts to see some events turn in her favor.  For instance, Autumn meeting the man of her dreams Bayani.  Could there also be a new job in her future?  What will happen with her new relationships?

This debut novel is a delightful read for the holidays.  I love how she included Christmas and Thanksgiving as events in the novel. There is a mix of humor with a dash of sadness that brings about a great story.  Readers who liked Twenties Girl by Sophie Kinsella will love this novel!

She does a great job with research and defining what a flapper is.  I learned a little about the slang of the twenties.  In some way I think this made the characters more memorable.  I did lose interest in some parts but Ms. Smith did a great job of bringing me back into the story.  I also know that we can plan to see more from her in the future.   I can’t wait to see what the next chapter will bring!

Please visit Angela on her Facebook page and  Twitter .
Posted by Jencey Gortney at 2:00 AM No comments:

Welcome to In My Mailbox post for this week.  Before I get to the mailbox do not forget about the Mid Winter Blog Giveaway Hop that is still going on.  We have some exciting plans for 2014 and I will share more next week! Merry Christmas and here is the mailbox for this week!

Second Star To The Right by Mary Alice Monroe 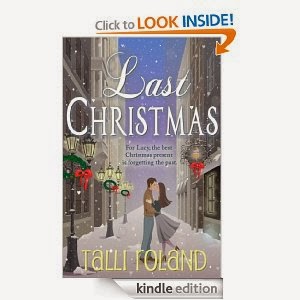 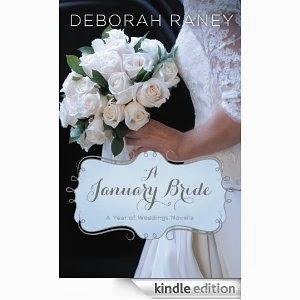 A January Bride by Deborah Raney