Can I Spin You A Story? 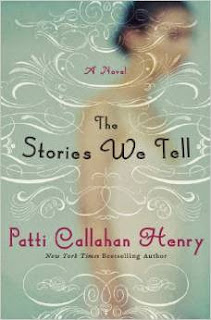 The Stories We Tell is a recent release by the great author Patti Callahan Henry. It has been released in paperback from St. Martin’s Press this summer.  Definitely a must have for 2015 Beach Read.   This story has a little bit of everything!

Eve Morrison runs a letter press company the Fine Line Ink.  It is her pet project that has become a successful company.  This company makes letter press cards.  There is one problem it takes away from her family.  She is married to Cooper Morrison and they have a daughter Gwen.  One night Eve receives a phone that an accident has occurred and both Cooper and her sister Willa were in a car together, and it crashed into the tree.  Cooper’s story is that it is all Willa’s fault because she was drunk.  Is that the actual story?  What happens when the evidence does not match Cooper’s story?  Who will Eve believe Cooper or Willa?

Another Patti Callahan Henry novel that I very much enjoyed!  The plot is intriguing, but could have been paced better.  I wanted Eve to figure things out a little sooner.   The story is set in Savannah Georgia. It also has a little bit of mystery when trying to figure out whose story to believe Willa or Cooper.  The research done on traumatic brain injury, for this story is illustrated well in Willa’s symptoms.

I loved how the author used symbolism in this novel.  The title is The Stories We Tell.  What kind of stories do you tell?  This is the question asked throughout the novel.  Are they truthful?  Or full of deception?   This is something the reader must decipher the story within the story.

Who Would You Trust? A Review and Giveaway 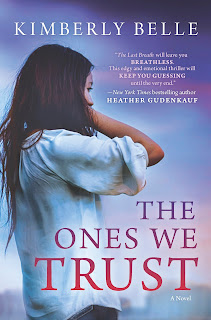 Thank you to Kimberly Belle and Mira for a copy of this novel The Ones We Trust in exchange for an honest review.  Another great read for the summer!  This is Kimberly’s second novel and a delight to share.  I am giving away one copy to a lucky participant!

Abigail has worked previously as a reporter but an event in the past has traumatized her.   This story caused a woman to hang herself and the woman she thought she had helped Maria got away.  So now she provides content for a Health website for seniors.  So when a kid shows up at her door related to the last story she wrote will Abigail have the ability to help him?  Will she be able to find the answers he is looking for related to Maria?  Then one day a transcript shows up on her front door in connection to a different case in connected to a past story that Abigail covered on Zach Armstrong.  Who killed him?  What will the answers finally yield?  Will these answers connect to the other story to the Armstrong case? Or will she have to betray someone she loves?

I had the opportunity to meet Kimberly at her event for her previous novel The Last Breath.  I very much enjoyed The Ones We Trust.  I don’t often highly recommend a thriller, but for this one I will.   It is one that you should take to the beach with you this summer.  The plot was intriguing.  I did find the love interest to be a little predictable, but it didn’t change my enjoyment of the story.  I loved how she wound two different cases together to bring about the full scope of the story.  Characters were also complex and full of depth.  You could see a real growth of these characters as the novel progressed.

I am looking forward to my next novel by Kimberly Belle.

Please visit the rafflecopter below: a Rafflecopter giveaway
Posted by Jencey Gortney at 2:00 AM 1 comment: