Are You Ready for the Next Tradd Street Novel? by Josephine Mattia 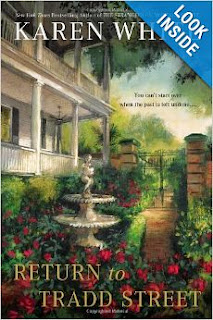 In Karen White’s remarkable novel Return to Tradd Street, a woman goes in search of clues in a neighboring house. This is the fourth novel in the Tradd Street series, but the fifth one is coming soon!  Catch up with as we share this exciting novel!

Meet Melanie Middleton, a forty year old Realtor from Charleston who is facing two problems. She’s pregnant and something is going on behind Mr. Vanderhorst’s house. Located at 55 Tradd Street, no one has lived in that house since the day Nevin Vanderhorst died.  Melanie is doing all she can to prevent anyone from owing it. One day, she has visions of a white bonnet and gown, also a baby and cradle.  Melanie meets Irene and George Gilbert who claim to be descendants of Mr. Vanderhorst. They want to own rights to his home. Melanie doesn’t believe it at first, but the Gilberts show her a yellow bonnet as proof.   Could this bonnet be the same one in her vision?  It turns out; the bonnet belonged to a woman named Susan Bivens who owned a shop in the 1860s. Is someone trying to protect the house? Meanwhile, Melanie and Jack Trenholm, have a history which is complicated due to her pregnancy and the past. Also, Melanie reunites with her estranged mother after thirty-three years. Will Melanie be able to find the clues to all these problems, and make peace with the past?

Return to Tradd Street was a book that I enjoyed it more than I thought I might, after reading The Time Between.  Mrs. White continues to be flawless in her writing. The plot draws you in because the reader wants to relate to the visions that Melanie has and what they mean to the story.   The chemistry that she has with her Mother is nice to see, because she has been out of her life since Melanie was a child.

Making peace with the past seems to be a recurring theme throughout the novel.  For example, Melanie making peace with her family. The characters are likeable and grow, as the story continues.

I can’t wait for the next in the series of Tradd Street novels!

Can All that Glitters Really be Gold? 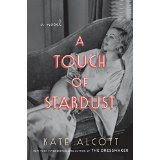 It was a cold February night when I met Kate Alcott at Margaret Mitchell House.  She was there to discuss her new novel A Touch of Stardust.  This novel focuses on the making of Gone with The Wind and one of its stars Clark Gable, and his relationship with Carole Lombard.

Julie is leaving behind the small town of Fort Wayne Indiana.  She is off to Hollywood to become a screenwriter like Francis Marion.  Her big job is working on the set of Gone with the Wind.  We initially meet Julie as she tries to deliver a message to David O Selznick the producer, during the scene of Atlanta burning.  He fires her but Clark Gable and Carole Lombard take pity on her.  She also gets help from Andy Weinstein another producer of the production.  Julie eventually becomes Carole’s assistant and spends a lot of time on the set and helping her with various tasks.  What will happen with Julie and Andy?  Will Clark finally get the relationship he has always dreamed of?

I found this novel to be an interesting read!  I did not enjoy it as much as The Dressmaker another of her Kate’s novels. I am not an expert in old movies.  The characters in this novel were great.  I felt that the author truly had the feel for the characters of Carole Lombard and Clark Gable.  The plot is driven by the characters in this novel.  We are introduced to Julie in the initially chapters who is our narrator for the story.  She helps us step out on this journey into Gone With the Wind.  I learned many surprising facts about this production of Margaret Mitchell’s novel.

There is a lot of Unpacking that Needs to Be Done 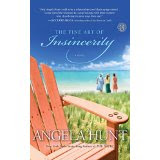 The Fine Art of Insincerity is a novel by Angela Hunt.  She writes Inspirational fiction.  This story focuses on three sisters who couldn’t be more different in their lives and relationships.  How could they possibly come together?

Ginger is putting the final touches on the sale of her grandmother’s beach house.  All she needs is her sisters to come and help over the Labor Day weekend.  Ginger knows what she wants and makes a list which should be easy to accomplish. Or will it once she learns what her husband has been up to?  Then there is Penny Royal who has almost as many marriages as their grandmother.  She feels it is time to leave another marriage.  Or is it?   Could she find what she is truly looking for with her current husband?  What about Rose the baby of the family?  Rose has had almost as many marriages but is happily married to Wert, a biker.  They have a farm and take care of animals that are in need of retiring from their day jobs.  There is a deep dark secret that Rose is harboring but will her sisters figure it out in time?

I liked this novel.  I didn’t love it. I think that I had a hard time getting over the insincerity issues that each sister has.  They do have a lot to unpack between each of them. I thought it was a great plot twist that the women find cassettes and a journal that their grandmother left them which details secrets of the her life.   This novel was set in Georgia on St. Simons Island.   A place that I would love to visit!