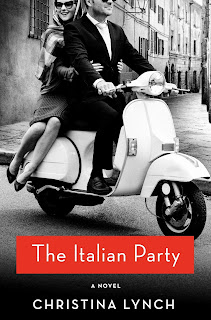 Ecco, most of the reviews of The Italian Party have overlooked your role in the book. Please describe what you do in the story, and tell us how you feel about being overlooked.

I’d like to bite someone right in the leg. First of all, I’m the true star of the book! I’m a fox terrier, so I’m incredibly feisty and adorable and always present in the story—even when Scottie is zooming around the Tuscan countryside on a scooter, I’m right there, ears flapping in the wind. My name means “Here he is.” I play a crucial role in the book. I don’t want to spoil anything, but the scene in which I first enter Scottie and Michael’s life is very important—they discover how rural Italians live, and how people of that era (1950s) are being forced to leave the country and move to the cities to find work. Michael’s job as a tractor salesman is part of the postwar Italian “economic miracle” that mechanized agriculture, which was good for profits but meant a lot of farmworkers lost their jobs. That’s part of the central tension of the story—are these modern American-style improvements actually making people’s lives better?

In the story you’re described as aloof—do you love Scottie?

Of course I love her—she’s everything a dog wants in a person: she’s kind to me, generous with the treats, and takes me everywhere. I get to investigate a mystery, and bring two people closer together. I’m also a symbol of loyalty in a novel that’s all about conflicted loyalties and secrets.

As an Italian, do you think the novel accurately captures Italian life in 1956?

Well, it accurately captures Italian canine life. The idea of buying special “pet food” for dogs didn’t really enter the Italian consciousness until later—that was a happy time when we dogs mostly ate leftovers. And leftovers in Italy are delicious!

Michael initially doesn’t want to adopt you –why?

He calls me a “Communist dog.” It’s kind of an important moment in the story, because he’s expressing the Cold War paranoia that was so pervasive. Scottie calls him out on that—there’s a lot of subtext in that scene, and it’s really about Scottie finding her voice (thanks to me). They’re both keeping a lot of secrets from each other—though not from me. I know everything.

You’re not the only animal in the story—there are also a few horses. How do you feel about horses?

Anything else you’d like to tell readers about The Italian Party?

I should really have been on the cover! There are pictures of me and other things that inspired The Italian Party here.

To purchase a copy of  The Italian Party at these retailers:


Christina Lynch’s picaresque journey includes chapters in Chicago and at Harvard, where she was an editor on the Harvard Lampoon. She was the Milan correspondent for W magazine and Women’s Wear Daily, and disappeared for four years in Tuscany. In L.A. she was on the writing staff of Unhappily Ever After; Encore, Encore; The Dead Zone and Wildfire. She now lives in the foothills of the Sierra Nevada. She is the co-author of two novels under the pen name Magnus Flyte. She teaches at College of the Sequoias. The Italian Party is her debut novel under her own name.