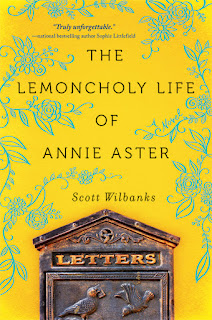 Thank you to Scott B. Wilbanks for stopping by Writer’s Corner today.  We are celebrating the recent release of the Lemoncholy Life of Annie Aster, and it is his debut!


How does it feel to finish your first novel?

It’s a Thursday afternoon for me, and I’m in the second week of my book tour.  I’m short on sleep, my hair is falling out (what’s left of it), I don’t know what city I’m in from one day to the next, and yet I can’t remember feeling so fulfilled.
At any given moment, I cross the threshold from anxiety to anticipation to exhaustion.  Still, I’m elated.

The truth is, I don’t know how to satisfactorily express exactly what I’m feeling right now.  There’s not a manual for this.  Beyond the deep-in-the-bones satisfaction I’m feeling for having beaten the odds, concluding a nine-year journey that began when I wrote the first line of Lemoncholy to the present moment in which I’m responding to questions on a published novel, I’m, frankly, bewildered.

Pick a day prior to my book’s release, and I’d count up, perhaps, half-a-dozen messages across my social media accounts.  By the evening of the day after Lemoncholy’s release, I’m guessing that there were about eight hundred.  I couldn’t type some variation of “thank you so much!” quickly enough to keep up with it all.
I imagined this moment, but imagination never aligns with the experience and, all in all, this one is magical.

What is the typical genre that you prefer to write in?

I’m noticing a trend.  With me, it’s less about the genre and more about showcasing the character.  I’m drawn to the oddballs, people who are marginalized.  Take Lemoncholy, for example.  Can you pinpoint a core genre?  I can’t.  It doesn’t sit still, bouncing from women’s fiction—being focused on the emotional journey of its two protagonists, Annie Aster and Elsbeth Grundy--to mystery, then thriller, all the while sprinkled with a dosing of magical realism.  Yet, look at the characters.

Annie, the central figure in the book, is a twenty-something eccentric with a passion for Victorian clothes and Jane Austen who lives in contemporary San Francisco.  The fact that she also has a form of pre-leukemia is a matter that we shouldn’t take too lightly.

Elsbeth is this dowdy, old schoolmarm living in a turn-of-the-century Kansas wheat field who possesses an inventory of curse words that’ll make a sailor blush, as well as a take-no-prisoners attitude.

Christian, Annie’s best friend, is burdened with a secret buried so deep within his subconscious that it has left him with a debilitating stutter.
Edmond, the character who coaxes Christian’s secret to the light of day, has a secret of his own—drug addiction.

And, finally, there’s Cap’n, a street urchin living in Victorian Kansas City who survives by dent of her wits.

All of them are entirely too well acquainted with solitude as a result of being pushed outside the margins of polite society.  And while I think there’s a lot of plot to sink your teeth into, it’s there to support their individual stories.
My current work-in progress is more of the same.

Do you have another project you are currently working on?

I’m currently wrapping a story around another oddball.  He’s a young, Southern man who is burdened with the world’s only documented case of chronic, incurable naiveté—the result of a curious subtype of ADD and a lightning strike at the age of four.

When it becomes painfully clear early on in life that he is a sucker for every con artist who crosses his path, my protagonist becomes a shut in and a night owl, only venturing out of his San Francisco apartment at 3:00am when the rest of the world is asleep and safely out of reach. He rides around the city on his tandem bicycle with banana seats and a wicker basket resting inside the front handlebars.  Inside the basket are a bag of Cheetos, an individually wrapped slice of bologna, a diet soda, and an urn containing his mother’s ashes.

Why a tandem bicycle?  His mother’s ghost joins him on his nightly rides, regaling him with stories of his childhood from the backseat.

How does your art impact your writing?  The paintings are beautiful!

I had a very active mind as a child, and an interest in EVERYTHING.  I’d bounce from one passion to another, rarely sticking around long enough to let the “passion of the day” marinate, so to speak.  Painting, however, was an altogether different kettle of fish for me.

I could sit still and draw or paint for hours.  However, when I showed an aptitude for gymnastics, I set art aside, thinking that I would always have that to fall back on when my fleeting gymnastics career was over.

By the time I was in my early twenties, I’d earned a handful of national titles in the sport, both on the junior and senior levels.  But it was when I was twenty-four that fate decided to put new meaning in the word “fleeting.”

I was competing at the Mardi Gras Invitational in 1985 when I had a pretty devastating accident involving a release move on high bar and a flash camera.  Setting the gory details aside, my left arm was, for all intents and purposes, severed off at the elbow.
That changed everything.  While I was the beneficiary of an “experimental” surgery that successfully reconstituted the mess that arm became, there remained extensive nerve damage.

I suppose this is where I should let you know that I’m left handed.
Is it any surprise, then, that I never lifted a paintbrush or pencil for the next thirty years?  I was simply too afraid to.

However, when I was seeking agency representation for my book, and getting nowhere, I came up with this harebrained notion to create a storyboard that I’d post on social media.

I collected some crayons and drew as I imagined a child would.  The first attempts were rudimentary, but with each successive undertaking, my confidence improved to the point that I’d tackle themes with a little more artistic intent.
And there you have it!

Come out and visit Scott on the road as he promotes this debut novel!

Email ThisBlogThis!Share to TwitterShare to FacebookShare to Pinterest
Labels: Scott A Wilbanks